Michigan Blue - February 2020
While cottages are synonymous with long-awaited, short-term stays, there’s no need to pack bags and head to another home when you live on a lake year-round. No matter the season, there’s plenty to enjoy when the abode is as majestic as the home architect Lou DesRosiers designed for Courtney and Duane Tursi on the shoreline of Upper Straits Lake in the city of Orchard Lake.

The professional couple approached DesRosiers several years ago looking for a home on the water where family members could relax, enjoy fun in the sun, watch a blizzard by the family room fireplace or lounge in a luxurious open-air grotto during a major rainstorm.

“When you walk through the front door, the view takes your breath away,” said DesRosiers, president of DesRosiers Architects in Bloomfield Hills, who is known for creating high-end homes with a special connection to the water. “I want you to feel like you’re a part of nature with the glass as the only separation.”

The Tursis say their 5,000-square-foot home does just that. It provides the comfort of home with the ability to enjoy a waterfront lifestyle without building or acquiring a second place somewhere else in Michigan.

“This is our Up North. With active kids, we’re so busy we could only go there a few times a year, so we put our budget into the grotto,” said Duane, who feels the wellness benefits kick in whenever he’s on his way home. “That last half a mile, I really start to unwind.”

While the home’s façade emulates a Cape Cod cottage, DesRosiers considers the house a bit of a hybrid with its warm and welcoming frontage and borderline contemporary windows on the lakeside. Repeat features keep it all cohesive, like the Connecticut fieldstone that evokes East Coast shingle-style homes on the ocean.

At the entry, a gently arched canopy roof with a Douglas fir ceiling tops the Connecticut fieldstone columns. Gabled roofs with undulating cedar shakes at the peaks feature copper-covered bay windows. Each wing has a two-car garage, while a spare space below provides boat storage.

Residential structures must be multifaceted to accommodate an intimate dinner party or an occasional crowd while being flexible enough for the family, DesRosiers said. The layout has to be versatile and serve simultaneous functions, from workout routines to movie marathons. The lakefront setting is another consideration. “Water is integral to human beings; it’s part of our makeup. We’re infatuated with it,” said DesRosiers, who noted the continual change of the color and texture from the light and the wind.

With so many tailor-made spaces, it might be hard to pick a favorite, but the well-appointed grotto off the lower level lakeside typically wins. The open-air space was designed with sophisticated seating, a flat-screen TV above the fireplace and a built-in grill. Perfectly positioned under the upper deck, stone arches conceal automated retractable screens while radiant heat and paddle fans accentuate the wood ceiling. A stately curved staircase nearby reveals an outdoor shower below.

The Tursis are an active family with a passion for outdoor sports. They were looking to create a warm and inviting atmosphere, DesRosiers noted. “They are very energetic and wanted their home to express their lifestyle with all the creature comforts like the grotto that turned out to be such a big hit. It’s just a fun place to be,” he said.

To reflect the Tursis’ style, Cheryl Nestro, principal and CEO of Tutto Interiors in Northville, took a more modern approach to a traditional interior with the hub of the home leading the way.

“With the open concept, they were initially very focused on the kitchen and all the details that went into it like the barrel ceiling in the pantry,” she said. “The house evolved from the central part of the home; it’s kitchen-centric, everything else flows from there.”

Working closely with the cabinet company, Nestro handled material selections for the painted finishes, granite countertops, ceramic subway tile backsplash, cherry wood floors and more. Other distinctive elements include the custom furnishings and attractive accent lighting found throughout, like the crystal pendants in the kitchen and the iron drum shade in the dining area. The neutral color palette was chosen for its calming effect with soothing grays from Benjamin Moore, like Plymouth Rock and London Fog.

Each room features a unique detail overhead like the coffered ceiling in the family room. The cozy seating area by the marble fireplace contains slightly oversized chairs, a comfy custom sectional and a cocktail table-ottoman combo that serves as a multipurpose piece.

Key components in the main floor master bedroom include a tray ceiling and a classic arch above the bed with indirect lighting around the perimeter. Striped wood veneer wallpaper highlights custom-sized nightstands and a tufted headboard. An upholstered bench sports acrylic legs, while pocket draperies simply dress the window to maximize the views.

On their wish list for the master bathroom: hidden linen closets, his-and-her vanities and a mosaic tile pattern on the floor. Classic cabinets designed by Nestro that were painted and glazed join the ultimate soaking tub overlooking the lake. Throughout the extensive project, Nestro noted that the homeowners were a pleasure to work with and receptive to suggestions. To sum up their sumptuous surroundings, “It’s all about comfort,” she said.

With three kids and a full calendar, Courtney Tursi said casual gatherings are a common occurrence. People often congregate in the kitchen to create memorable meals before heading downstairs to the popular grotto. With an open plan on both floors, the kitchen overlooks the family room and the lake on the main level. Other highlights on the lower level include a home theater and a pingpong table.

Courtney said Nestro was instrumental in the interior selections: “Without Cheryl, our home wouldn’t be furnished, and the walls would be white.”

It’s been almost five years since the Tursi family settled in, and the compliments keep coming. “People are amazed at the panoramic view and they love the grotto and the kitchen,” she said. Being at the end of a peninsula with a 270-degree view of the water is very special for Duane.

Though the couple previously lived on a lake, they were looking for a flat lot that was better suited for their active family. They also enjoy surfing, tubing and wakeboarding and a variety of fireworks.

“The lake extends the backyard as it relates to the land, and the lot that’s just north of an acre, is great for Frisbee, soccer and whiffle ball,” Duane said.

“We chose Lou early on and we learned so much. Then Cheryl brought such a nice perspective to the interiors. There was such a good balance and the result is great,” said Duane, who also praised their builder Thomas Sebold and Associates in Bloomfield Hills with Glenn Kunnath as the general contractor.

With a custom build, you get to think about the details: how you live and work, where you bring in groceries and what the flow is like when you entertain, Duane said. “That’s the benefit of planning,” he added.?

Jeanine Matlow is a Detroit-based writer and regular contributor who loves writing about homes and cottages. 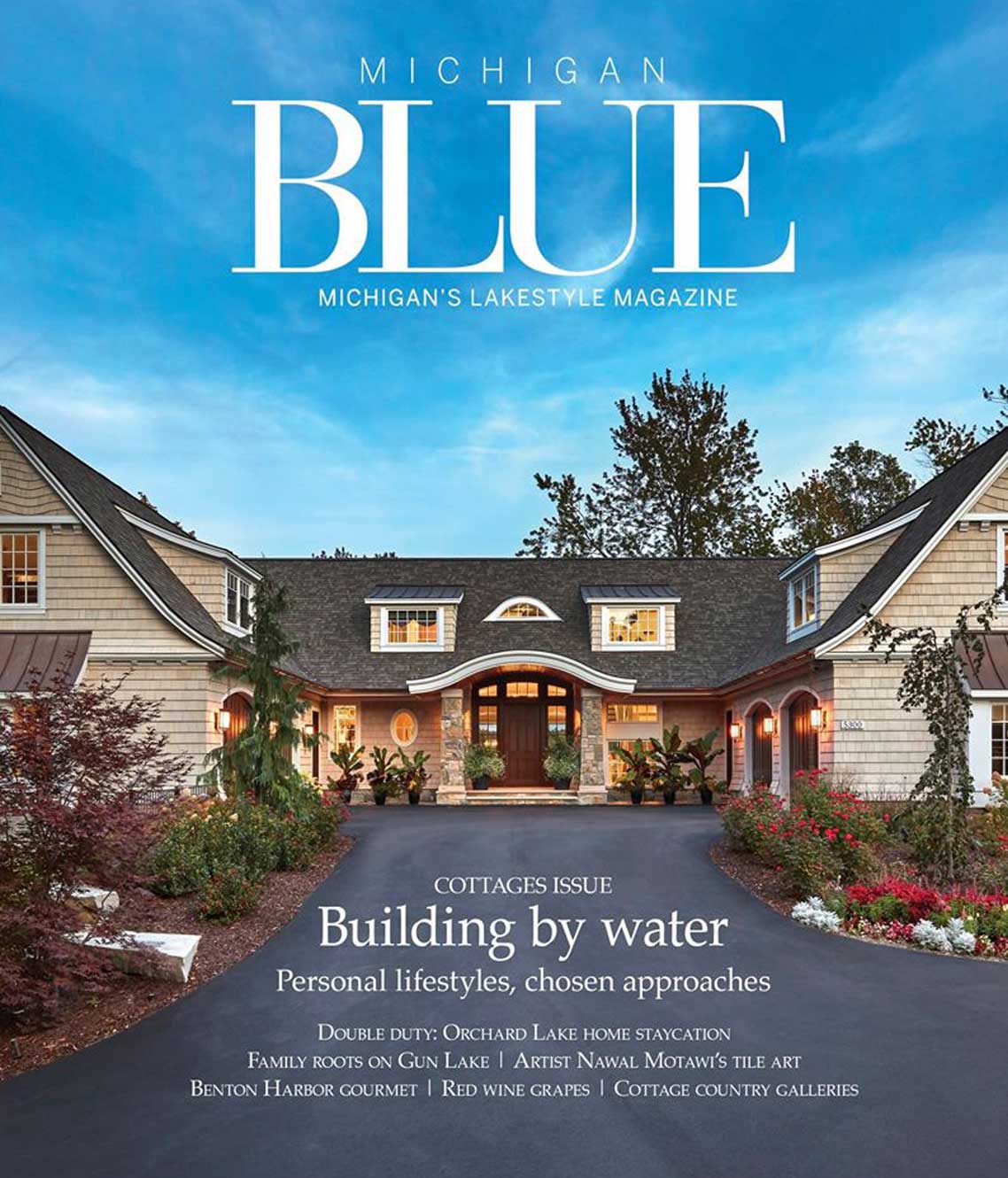 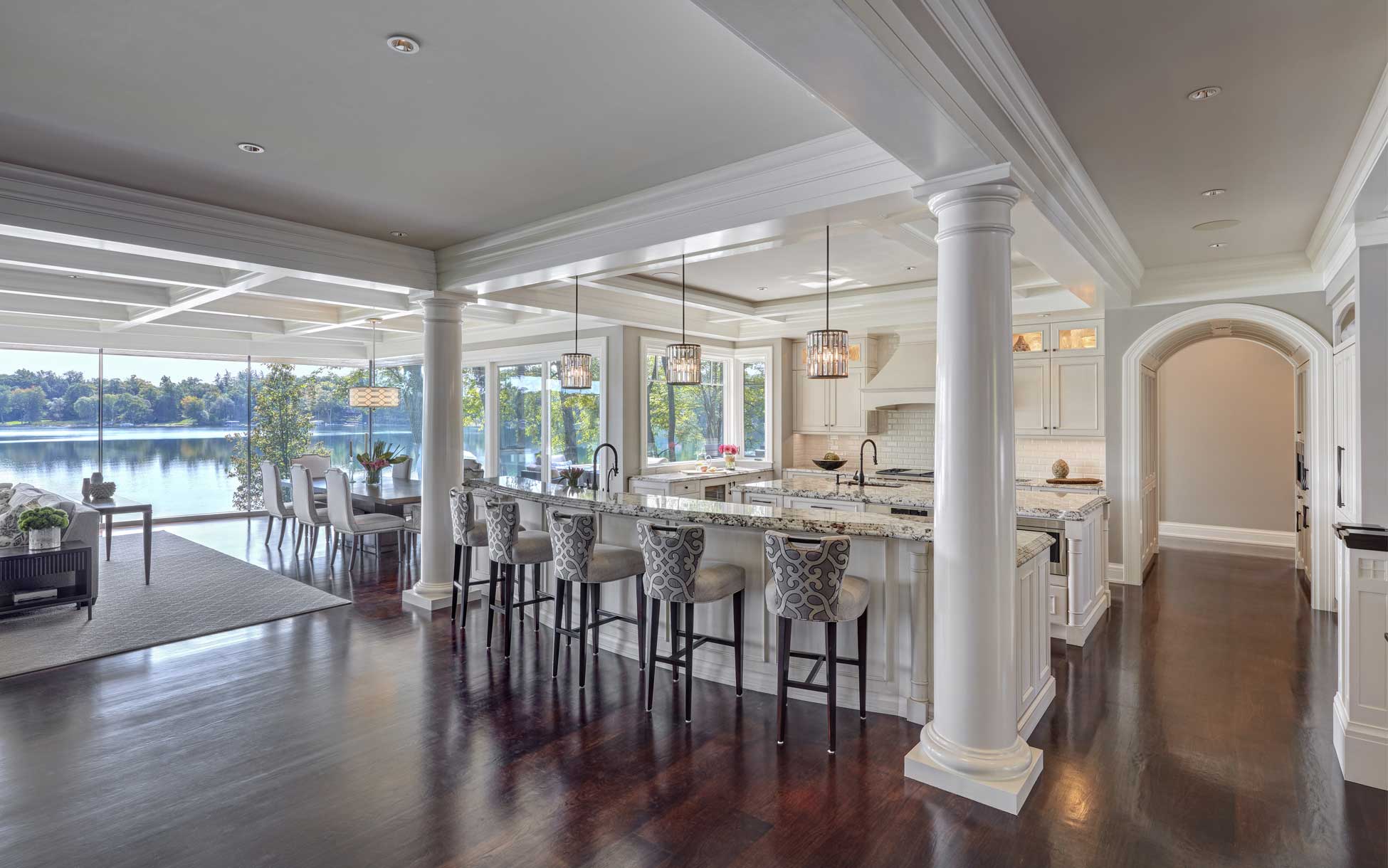 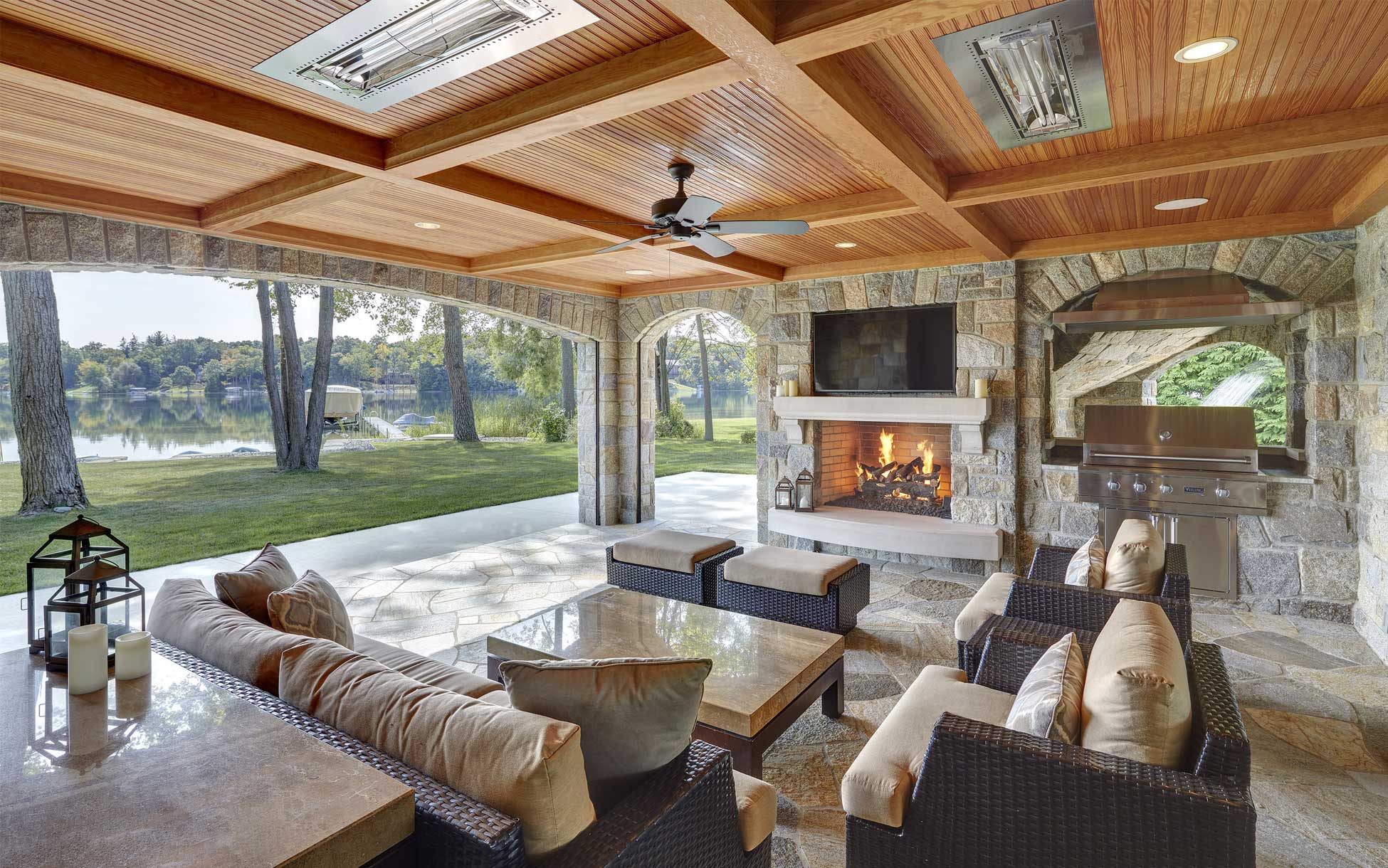 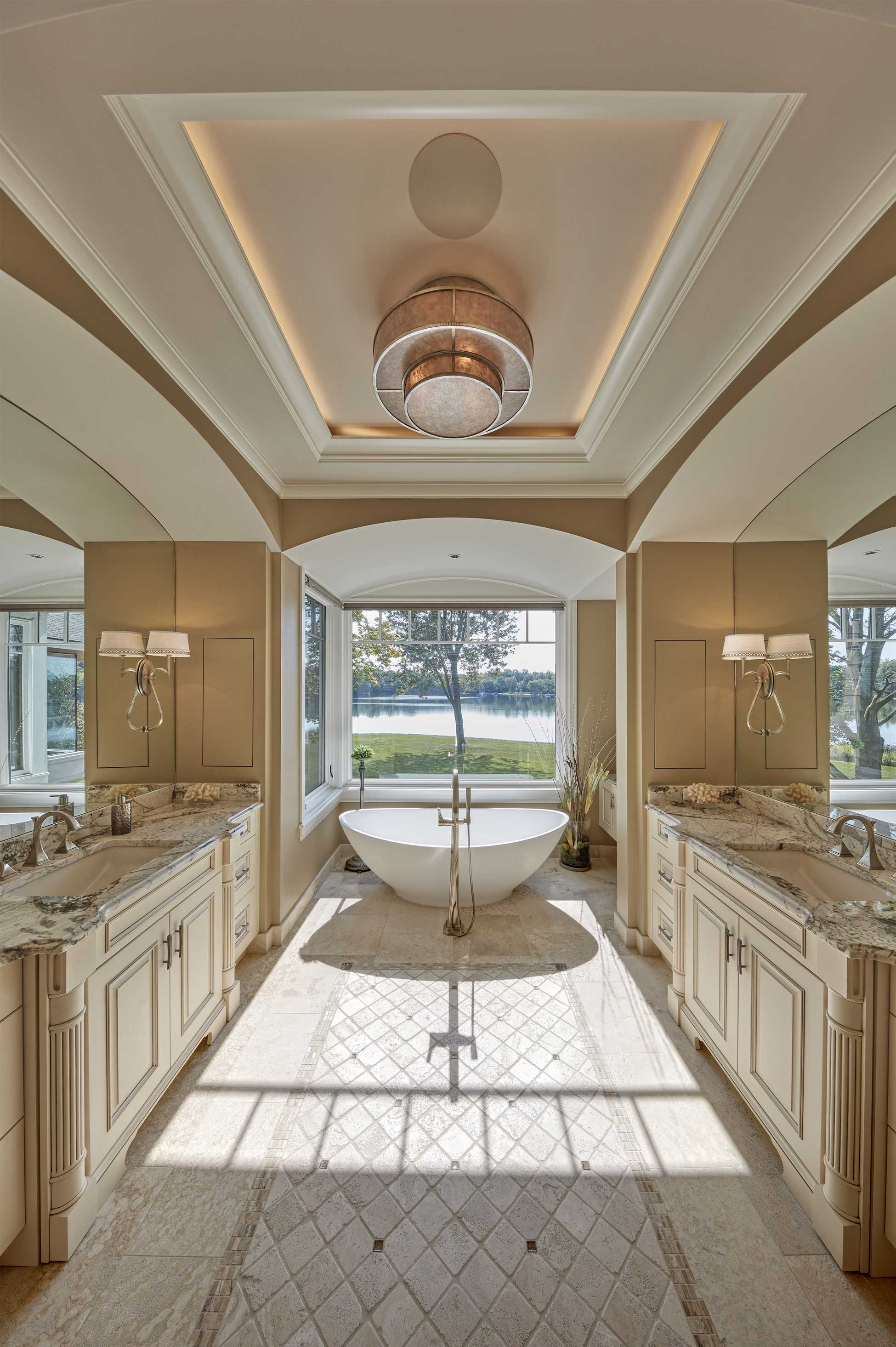