Northern Nest – On The Waterfront

It took a decade for Lou DesRosiers to find the perfect site for his Up North home.

That’s because the third-generation architect knew exactly what he was look for: a quiet, west-facing spot on the Leelanau Peninsula, no more the 25 feet above Lake Michigan’s waters, with a view of islands. He also wanted the property to have shade-providing trees and easy access to a permanent, sandy-bottomed beach.

Fortunately, DesRosiers was equipped with the patience to wait for what he wanted. Today, the theme of the “warm contemporary” home he built on that perfect site in 2008 reflects the visionary quality possessed by the president of DesRosiers Architects.

“The entire concept is about views,” he says. “Every room in the house has a view – a magnificent view. It’s about appreciating nature and everything that’s around you.”

What that translates into is a 5,000 square foot, four-bedroom, five-bath home on Good Harbor Bay that feels more like a pavilion – an entirely intentional effect – than a traditional residence. “The glass is just there to protect you from the elements” DesRosiers says. “Otherwise, you’re just under a big roof. The whole idea is to feel that you’re one and the same with nature.”

Born and raised in Michigan, DesRosiers’ affection for the region stems from early family vacations to the area. “When we visited Leelanau Peninsula, we fell in love with it,” he says. “Rightfully so, because in 2011, viewers of Good Morning American voted it the most beautiful place in the United States.”

A portion of Good Harbor Bay is actually part of the Sleeping Bear Dunes National Lakeshore. From DesRosiers’ great room, which is lined with panels of glass as large as 7 feet by 10 feet, one can see North and South Manitoulin Islands (also part of the park), as well as the North Manitou Shoal Light (affectionately dubbed “The Crib”). The area between DesRosiers 135 feet of Lake Frontage and the islands is called the Manitou Passage; generally it’s a busy section of water, used by both freighters and sailboats participating in the Chicago to Mackinac race. “You never get bored, “DesRosiers says as he contemplates the upcoming race. “If you’re just looking at a wide-open ocean – or any body of water – and it’s just a horizon, you see a blue line and that’s all you ever see (That’s not the case here.)”

By eschewing mullions for butt joints, the glass panels throughout the house are designed to provide as unobstructed a view as possible. Taking this conviction to panoramic vistas a step further, DesRosiers – who also designed the two homes on either side of his property – invented something called “view lines,” an agreement with the neighbors that says nobody can plant a tree that will compromise the others’ view, “so that each person, in their home, can look at 180 degrees of lake, unobstructed.”

A second but equally important theme in the home is one of respect for nature. “I try to use indigenous, warm materials, “DesRosiers says, “The roof is a cement-tile roof, stained a sort of mossy green color, which fits in nice with nature. All the wood that’s exposed on the exterior of the house is natural cedar.” The stone walls are from nearby Fon-du-Lac, WI., chosen because “that particular stone matched the color on the beach almost exactly.”

Although DesRosiers and his family enjoy a variety of aquatic activities on the azure-hued water during the summer, the home is not just a seasonal get-away – it has become their permanent home. The architect and his wife keep a low maintenance condo near his Bloomfield Hills office, but much of their time these days is spent Up North.

“The most exciting part of living here is when the big storms come across the lake, all year round,” DesRosiers says. “You can see them for 30 miles, coming toward you. And there you are, separated from nature by one-inch insulated, bronze-tinted glass.” 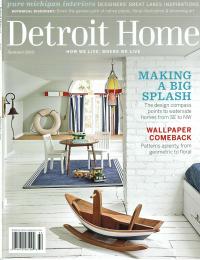 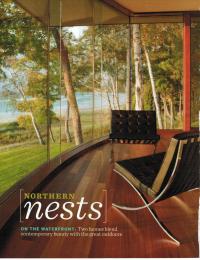 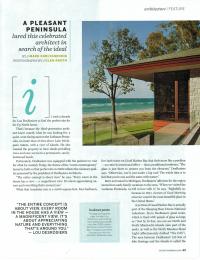 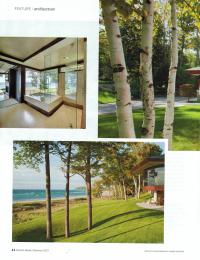 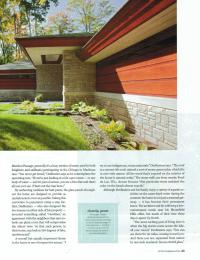