Stories about how families discovered their special Northern Michigan vacation spot abound—especially around the much-loved Crystal Lake area. In Ted Greene’s case, it was his grandfather, a schoolteacher in Cleveland in the 1920s, who first brought his family to Crystal Lake after his school’s principal invited him to spend the summer helping him build a cottage on the lake. As Greene says, “Anyone who spends any time on Crystal Lake is hooked.” And so it was with his grandfather who first purchased lakeshore property there and brought his young family to camp on it for many summers in a row. When Greene’s father was in high school, he designed a cottage for his parents’ property in drafting class, and the first Greene family cottage on Crystal Lake was built soon after.

Later, Greene’s father built his own cottage on the lake, a mile from Greene’s grandparents’ cottage. Needless to say, Greene was as in love with Crystal Lake as his forebears. Among the many things woven into his memories of those childhood summers was the clubhouse for the nearby Crystal Downs Country Club, home to a famous Alister MacKenzie-designed golf course. The clubhouse was designed by J. Alexander McColl, a Michigan architect whose work was also well respected in the last century. Although McColl prided himself on his ability to design in many genres, he was especially drawn to the timbered Tudor style—a style he used for the Crystal Downs Clubhouse. A century after the clubhouse, with its impressive white cedar truss system, was built, the members, says Greene, “are almost as proud of their clubhouse as they are of their course.”

But the Crystal Downs Clubhouse wasn’t the only building that Greene remembered from his early Crystal Lake years. Also close to his family’s homestead was a beach cottage built in 1955 by another even more widely acclaimed Michigan architect, Alden Dow.

“I remember as a kid everybody’s jaw dropping when they saw it because the front was all glass. It was just a fantastic way to enjoy the view,” Greene says. “All those years I had two goals for my ultimate Crystal Lake home: The first was to mimic timber frame construction of McColl and the second was to mimic Dow’s use of glass and high ceilings.”

Several years ago, Greene acquired another lot on Crystal Lake. With his growing family filling all available family cottage space during the summer, he decided it was time to build that home he had long dreamed of for him and his wife, Arline. After he visited architect Lou DesRosiers’ home on Lake Michigan south of Leland, he knew DesRosiers would be the architect. “I saw his windows, big panels of glass that are butted together with no window frames. Looking out, you feel like you are right there on the beach,” remembers Greene.

DesRosiers was all onboard. “We call ourselves the view architects,” he says of his firm. “We are about view, view, view.” Beyond Greene’s desire for walls of glass, DesRosiers was delighted by Greene’s enthusiasm for a wooden truss system. “The use of wood is a great marriage with expansive windows because the wood warms everything up.”

Greene went on to share more of what he was looking for with DesRosiers, including a one-level home with a central great room where his entire extended family could enjoy one another—and where parents could easily keep an eye on their children while they were playing on the beach “It was about bringing together the best of modern design and living—an open floor plan, a large use of glass—with natural materials and cottage-inspired design elements to make the home feel cozy yet spacious when filled with family,” DesRosiers says.

The builder would be Ray Franks of Heartwood Custom Builders who had built Greene’s first Crystal Lake home in the 1990s. “He’s a hero. I trust him,” Greene simply says of Franks.

Greene had one other stipulation for DesRosiers: Greene would be intimately involved in every aspect of the project. As it turned out, like everything else about the building of Timbers, the client/architect relationship was a joy. “Lou and I have gotten to be best of friends,” Greene says. “I would come to him with ideas, some of which he’d say you must be kidding. But we pretty much went 50-50 on who prevailed.”

The finished home is indeed a masterpiece of collaboration. In the great room, floor-to-ceiling windows usher in the lake view, while fully opening sliding glass doors and automated roll screens allow the porch to become a part of the room in good weather. Complementing the inspirational view are 10 three-story white oak trusses, constructed by the Traverse City company Strong Timbers, that run from the foyer through the great room and support a white oak V-grooved paneled ceiling. “It took a crane 10-stories tall to lift the trusses up and set them down,” Greene says.

Lighting is completely hidden in the trusses. “My training is as a physicist, so LED lighting fascinates me. My electrician, Randy Olsen, and I were joined at the hip in designing the lighting,” Greene says. “I think it turned out spectacularly and adds a little sparkle to the rustic feeling of the room.”

Besides the view, the focal points of the great room are a massive fireplace built of Mississippi cream stone (the same stone used on the home’s exterior) and a custom teak bar paneled in mahogany crotch wood built by Vogue Furniture. An efficient, open kitchen with creamy white cabinetry, designed by Angela Goodall of Kitchen Choreography, and a massive, custom round walnut dining table (with legs designed in the timber frame pattern), also built by Vogue Furniture, round out this communal space.

All of the elements of the home—the glass, the timber, the lighting, the meticulous craftsmanship and the layout—work in such inspired harmony that DesRosiers likens the home to a country cathedral. No doubt, this home that brings together Crystal Lake’s vernacular with modern ingenuity and a strong sense of a family-oriented design is just that sort of timeless architecture. 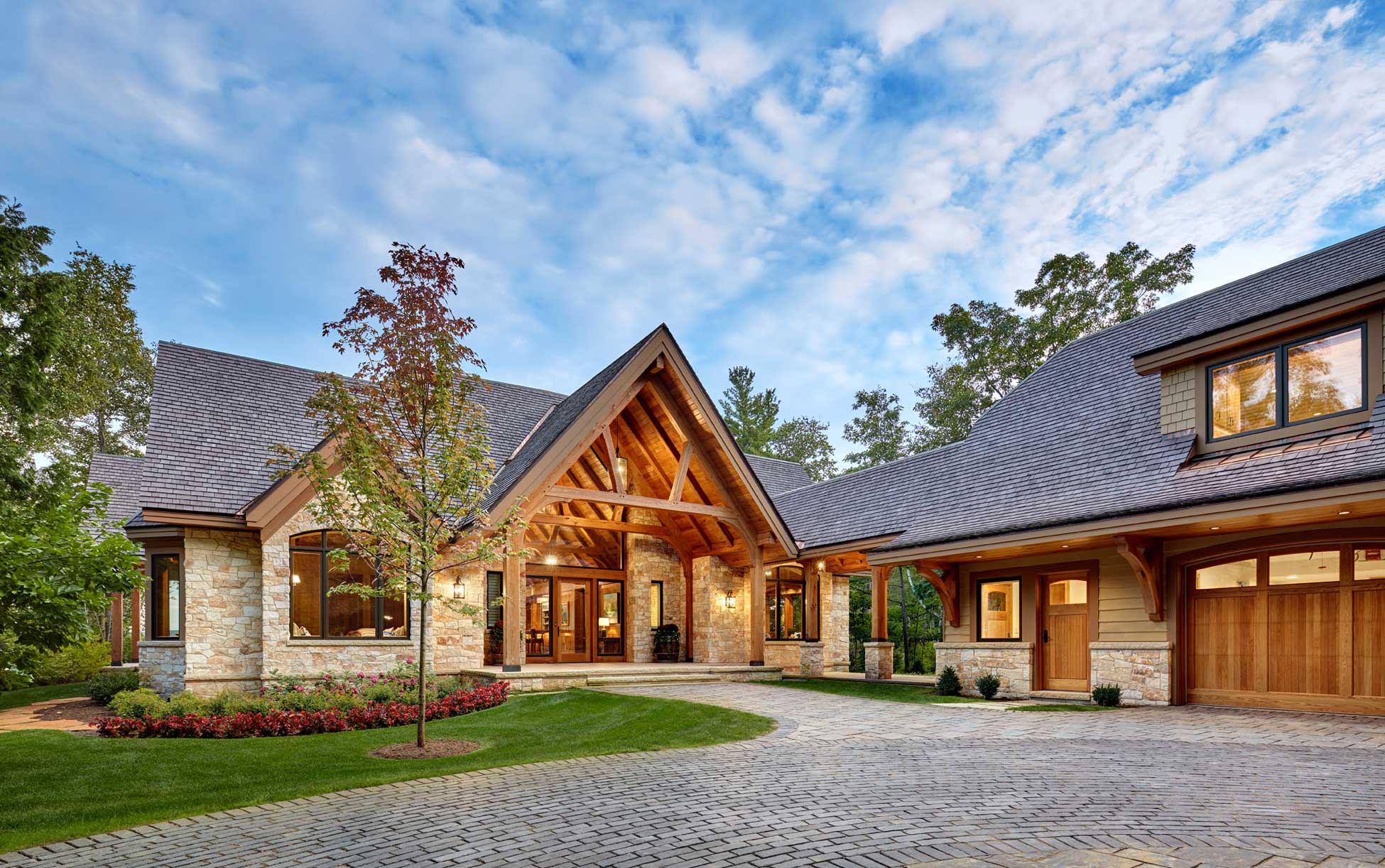 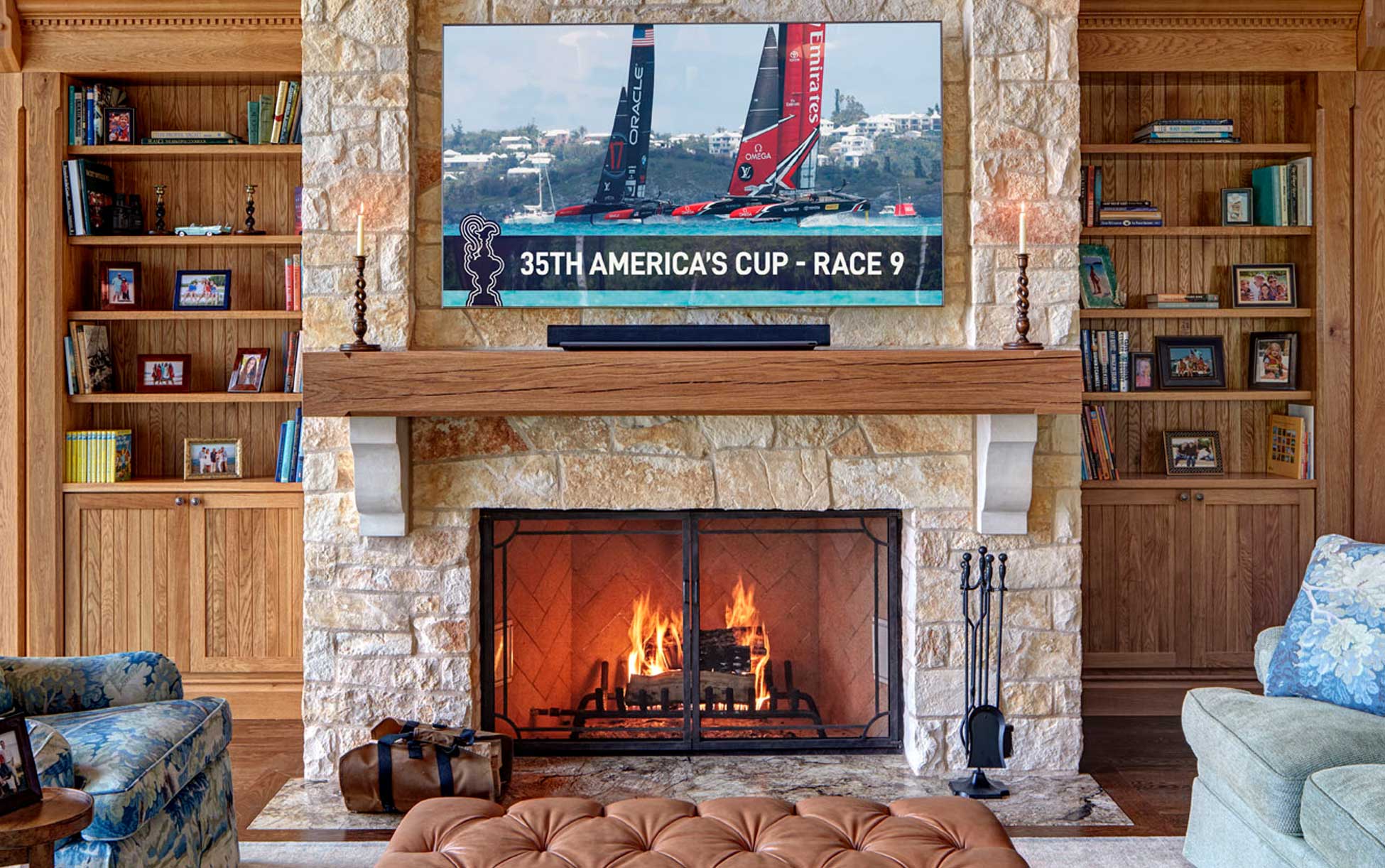 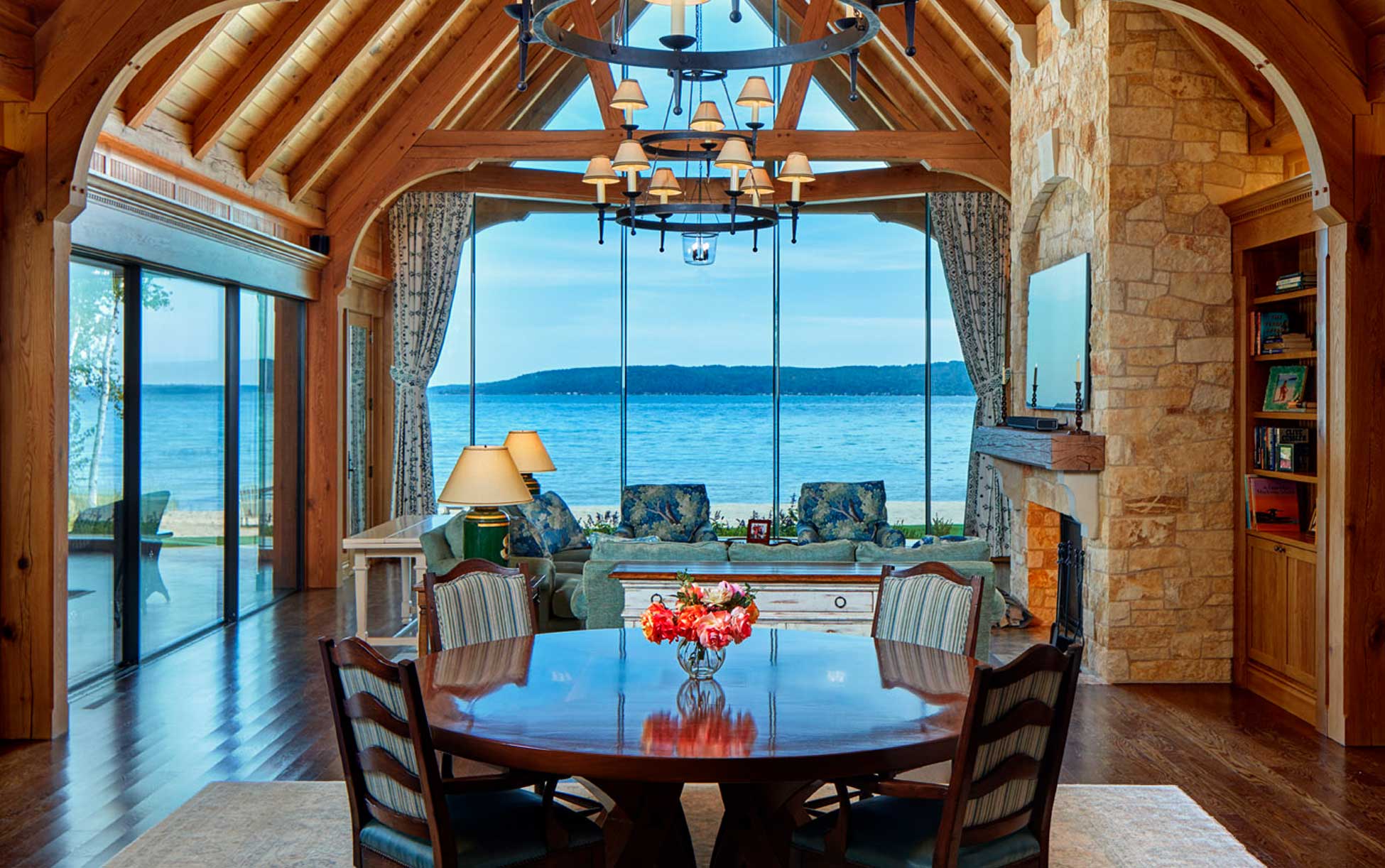 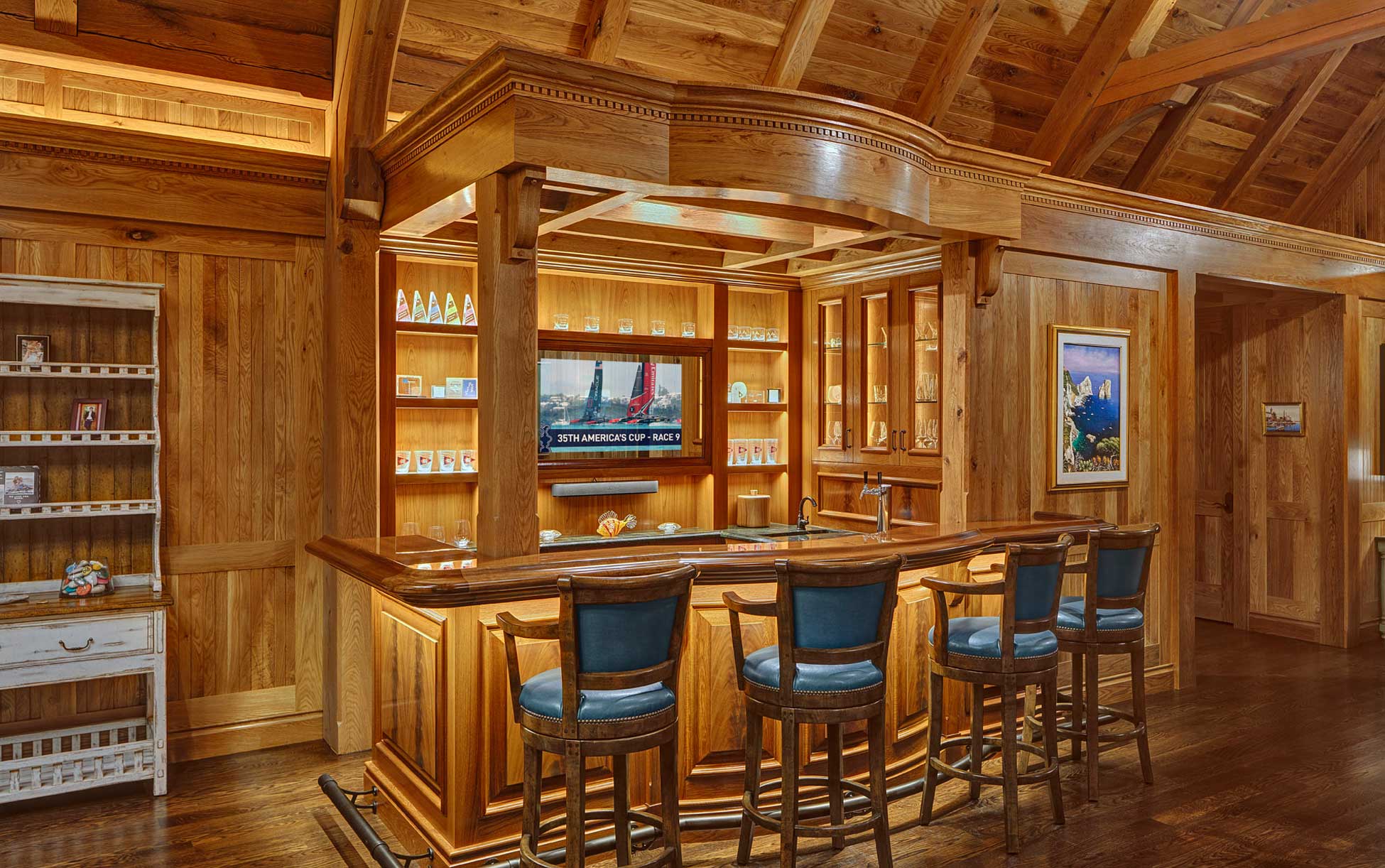