Plein-Air – A lakefront home brings the outside in

David Strach assembled a dream team. Once he saw the wide-open-view aesthetic of the Up North home of architect Louis DesRosiers, founder and president of DesRosiers Architects in Bloomfield Hills, he knew he wanted a similar design for his own property, situated on Fenton’s pristine Runyan Lake.

Adding interior designer Bob Schaerer, president and owner of Schaerer Architextural Interiors in Bloomfield Hills, and designer Jodi Caden, owner of Birmingham’s Caden Design Group, to the mix, Strach handed over the reins to the trio, who worked seamlessly together.

“It was a collaboration from the beginning,” says Schaerer. “We played off one another, and an aesthetic developed out of that collaborative environment. It just flowed.”

Because the lake surrounds the house on two sides, DesRosiers was able to give every single room a view of the lake. “The home is designed around the feeling that you are outdoors, protected from the elements, like you are at the helm of a ship,” says DesRosiers. “And because the home faces west, the phenomenal sunsets come down and go right through the front door.”

“This is one of my favorite homes,” says Caden. “It’s a true Lou home, with the emphasis of bringing the outdoors in, and centering the home around the kitchen as a central living space. We all came together to make it a clean-lined classic contemporary, but it’s also injected with a lot of warmth.”

In the lower level, what appears as a glistening piece of sculpture behind the bar reveals itself to be a pair of floating wine racks supported by stainless steel struts behind a glass wall. Stainless steel doors enclose the wine room for temperature. “David really rose to the challenge,” says interior designer Bob Schaerer. “He had maybe three bottles of wine to his name, and now he’s fully stocked with enviable vintages.” A mixture of textures and materials keeps the bar from becoming too slick: Stainless steel frames the bar, which is topped with granite; the exposed stone is the same used on the home’s exterior; and mahogany-like ribbon sapele fronts the bar. Ribbon sapele backs the orange-leather barstools from Poltrona Frau, which began in the 1800s as a saddle company in Italy. Clodagh tiles, made up of tiny riverwash pebbles, line the floor.

“Although David is a bachelor, he didn’t want it to look too much like a bachelor pad,” says Schaerer. “He wanted some elements of femininity so we used a lot of white and off-white, which is easy to adapt in the future.” The wall of cabinetry in the kitchen is echoed in the great room to appear as paneling, with illuminated white-glass cubbies floating above. A pair of cocktail tables – crafted of coconut shells assembled then run through planers – sit side-by-side in front of the fireplace, created from the same fond du lac stone exposed in the lower-level bar and on the home’s exterior. A cantilevered hearth seat and mantel is made of slabs of Indiana limestone. “When cabinetry, millwork and architecture all come together, it’s really a wonderful thing,” says Schaerer.

The home’s kitchen was designed as part of a one-room living area that encompasses the dining area and great room. “It’s the new American way of living,” says architect Louis DesRosiers. “It’s like one-room log-cabin living. It pulls the whole family together – one person is cooking, and someone else is doing a puzzle at the kitchen island, the kids are doing homework at the table and someone else is watching a football game. But it’s really all one space.” Add Schaerer, “Designer Jodi Caden and I said almost in unison, ‘It can’t look like a kitchen because it’s part of the great room.” A wall of cabinetry, crafted from straight-lined ribbon sapele to look like paneling, conceals the refrigerator and freezer; between them, the microwave and coffee-maker are exposed. A pillar at the end that hides storage is echoed on the other side of the doorway. To steer away from a “kitchen-y” backsplash look, sheets of white-painted glass line the walls above the counters; the same white glass is used for the doors above the range and surrounds the interior niches above the cabinetry, offering airiness to the tall expanses of wood. Caden cut out a corner of the appliance garage, where larger, sculptural electronics can be out of the way but still neatly on display. A pot-filler faucet above the range has a companion sink with a custom cutting board. White Calcutta marble tops the island and counters.

In the master bath, acid-etched glass to the left conceals the shower and toilet area, divided by a floating tile wall. A marble-topped vanity just perches above a ledge that rises up from the floor then crashes into the sunken tub deck. “We played with the dimensions and height to create a little tension,” says Schaerer. More ribbon sapele frames the mirror which can be touched to transform into a TV screen that can’t be seen until turned on. Reflected in the mirror, stylized trees intertwine in the silk fabric covering the wall above a dresser in the dressing hall; the fabric is repeated on the headboard of the bed in the master bedroom (not shown). “The design really picks up on all the beautiful trees on the property,” says Schaerer. “The nature around this house is so in-your-face, we really wanted to embrace that.” Silent electric rolled blinds recede into the ceiling, and all the windows are bronze-tinted glass “so the whole house is like it is wearing sunglasses,” says DesRosiers. “It protects furniture from infrared rays, it makes the exterior look warm and cozy, and it lends privacy during the daytime.” 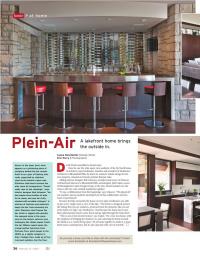 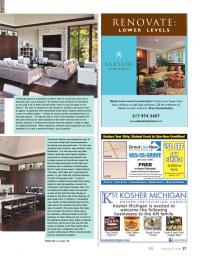 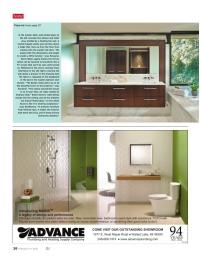