Where the Car Is King – Garages are becoming more lavish, loaded with high-end finishes like flat-screen TVs and underground car lifts

Tim Wellborn’s two-story garage in Alexander City, Ala., spans 14,400 square feet and can fit 12 cars upstairs and six below. The walls are made of New Orleans brick, and the concrete floors are stained to look like stone. For entertaining, there’s a Cuban mahogany bar with granite countertops and an eight-seat theater.

The total cost: over $1 million. “It’s more than our house,” says Mr. Wellborn, co-founder of Wellborn Forest Products, a kitchen cabinet manufacturing company that he sold in 2006.

Once seen as a catchall space to store bicycles, trash cans and lawn tools, garages are being rediscovered as the ideal place—who knew?—to park cars. Increasingly, many of these spaces are also becoming more lavish—loaded with high-end finishes and man toys, such as flat-screen TVs, underground car lifts and welding equipment.

“People are beginning to see that garages can be as cool as the rest of the rooms in the house,” says Lou DesRosiers, president of DesRosiers Architects in Bloomfield Hills, Mich., who has seen a 15% to 20% uptick in garage projects in the past five years.

Rick Krug, co-owner of TR Building & Remodeling in New Canaan, Conn., says his company has seen an estimated 50% increase in garage projects over the past three years. “People want more space, either additions or new construction,” Mr. Krug says. “With all the junk you have these days for families, you need that additional bay or additional half-bay to store everything.”

Last year, Mr. Krug says, he built a 1,500-square-foot garage in Fairfield County, Conn., that holds four cars above ground and one below via subterranean lift that opens into a wine cellar. A lofted living area, complete with a kitchen area and full bathroom, overlooks the space where the cars are parked. The homeowner, who works in sustainable energy, wanted different viewing spaces to look at his high-end electric cars, Mr. Krug says. He put a glass door in between the wine cellar and underground parking space so the owner can “walk into the lift and touch and feel the car from the wine cellar,” he adds.

The barn-style garage features carriage doors, eastern white pine walls and chestnut stairs and railings. It’s outfitted with high-tech gadgets, like two charging stations for the electric cars and iPad-controlled surround sound and lighting. Mr. Krug declined to give the exact cost but said it was more than $1 million.

Even garages used for entertaining are designed around the car: the vehicle might be parked on an electronic turntable and surrounded by a bar and seating area. “People love to have their cars on display,” Mr. DesRosiers says. “When they have parties, they bring the parties out to the garage.”

Mr. DesRosiers recently completed a 6,200-square-foot garage in the suburbs of Detroit that has a 1,800-square-foot detail shop on the lower level with a penthouse above, accessible via elevator. Materials include granite and porcelain tile, mahogany paneling on the walls and chandeliers in the two attached bathrooms. The owners keep specialty cars in this eight-car garage and have a separate six-car garage for their everyday cars. The eight-car project cost $1 million, Mr. DesRosiers says.

Mark Peterson, a software entrepreneur in the Milwaukee suburbs, outgrew his eight-car garage, which no longer had room for his truck, his three children’s cars and his collection of about 30 motorcycles. So he built a new one, which he calls “the ultimate man cave.” The 6,000-square-foot space has a main level for vehicles and a lower-level workshop accessible via car lift, designed by American Custom Lifts, an Escondido, Calif.-based company that designs hydraulic and mechanical lift systems. An upper-level loft has a small kitchenette, Oriental rugs, hardwood floors and a leather couch.

Mr. Peterson, 50, says he spends most weekends in the garage, watching the Packers or other games on TV with friends or working on motorcycles in his shop. There are seven flat-screen televisions throughout the three levels. “I can build a motorcycle and watch a football game at the same time, which is pretty sweet,” he says, adding that the garage cost more than $500,000 to build.

Jane Peterson, his wife, helped him with the décor but doesn’t spend much time up there. “I’ll sit there on occasion, but it’s very much a man haven,” she says. Instead, Ms. Peterson has a mom cave—an office in the house decorated in sage green, raspberry and yellow florals that looks out over the garden.

Roughly 85% of all single-family homes in the U.S. have a garage, and 74% of homeowners with one say that parking cars is its most important use, according to a February survey of 987 homeowners by Home Innovation Research Labs, a subsidiary of the National Association of Home Builders.

Even if an existing home has a garage, one or two bays may not be enough. “Those garages are not suitable for today’s vehicles. They’re just too small,” says Mr. Pekel of the Milwaukee construction and remodeling firm.

By and large, men are the primary users of garages, at 70% overall, Mr. Hudson says. For some purposes, like maintaining vehicles or working on projects,more than 90% of all users are men.

Homeowners who enlarge their garages may see a high payoff when it comes time to sell, says Ray McCarthy, a real-estate appraiser in Bloomfield, N.J. Building a three-car garage can add about 2% to 3% to the resale value, or roughly $20,000 to $30,000 for a $1 million house, he adds.

But a garage that is too customized could be a liability. “When they start to overdo it, when they start putting in the double lifts and customizing the garage, that could hurt the marketability of their house on the next sale,” he says. “There’s a tipping point. There are still a lot of people who just want to park their car in there and not have anything else.”

Allen Sunderman, 65, created a 900-square-foot Zen-themed garage in his Paradise Valley, Ariz., home for his 60th birthday and didn’t think twice about resale value. “If I would have taken that into consideration, I never would have done it,” he says. “This is a space for me and my cars.”

The interior of the three-car garage was designed by GarageMahals, a luxury custom garage design-and-building firm in Scottsdale, Ariz. Mr. Sunderman’s garage features an epoxy-coated floor, as well as gold- and bronze-colored wainscoting on the walls. A stainless-steel-and-copper bar area is flanked by two slate-backed waterfalls that start running when the garage doors open. Mr. Sunderman, former head of a home-health-care company, likes to unwind with a drink before entering the house. The project cost $150,000, he says.

Wayne Burkhart, 68, built a four-car parking garage under his home connected to a four-car working garage. The working garage has a lift and myriad tools, including a milling machine, grinder and welding equipment, so he can restore and build cars. His Nokomis, Fla., home is on the market for $1.1 million, but Mr. Burkhart says he didn’t consider resale when he built it. “I built it the way I wanted it. I wanted a bathroom in it; I wanted an office in it; I wanted a urinal in it—and that is what I did,” he says. 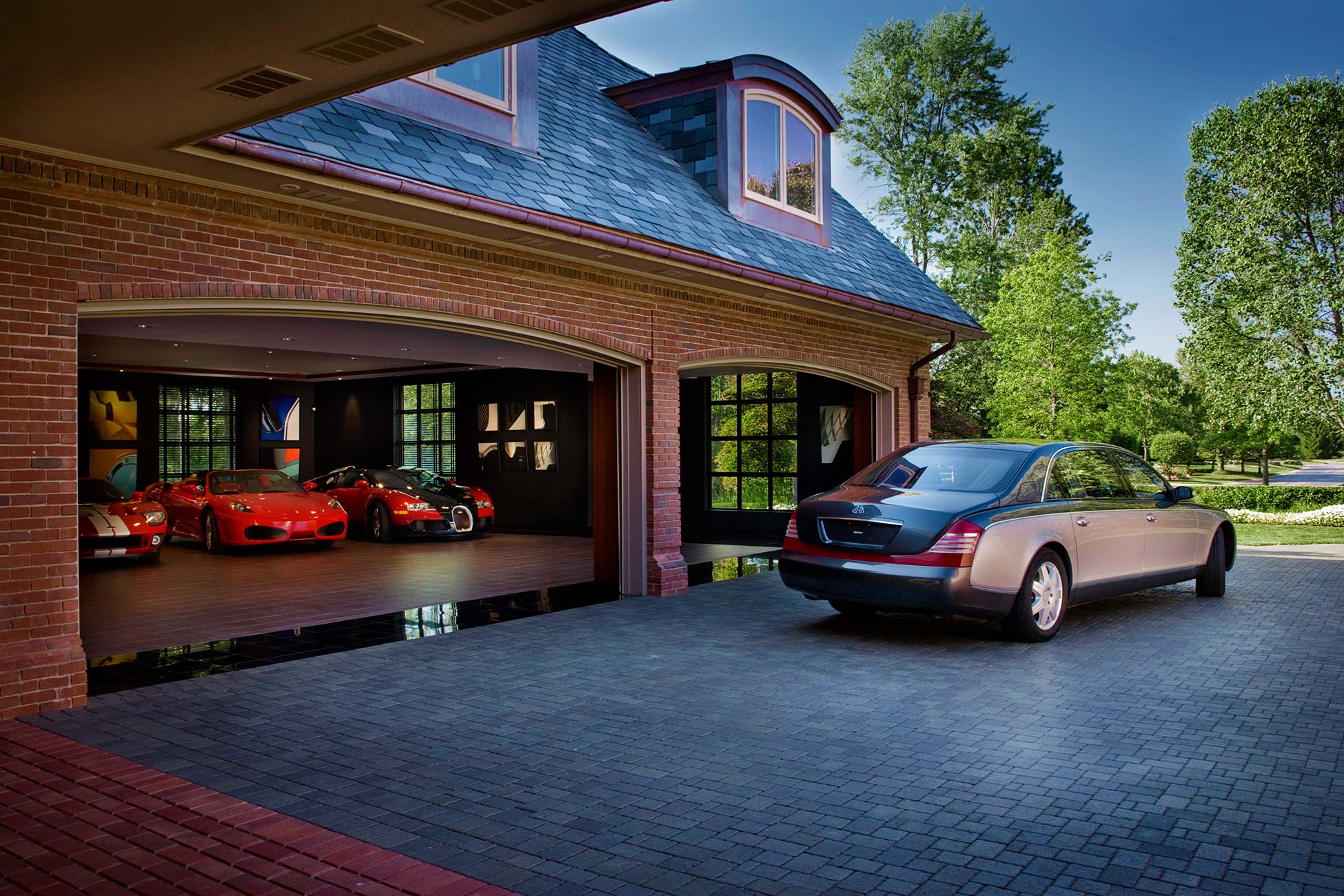 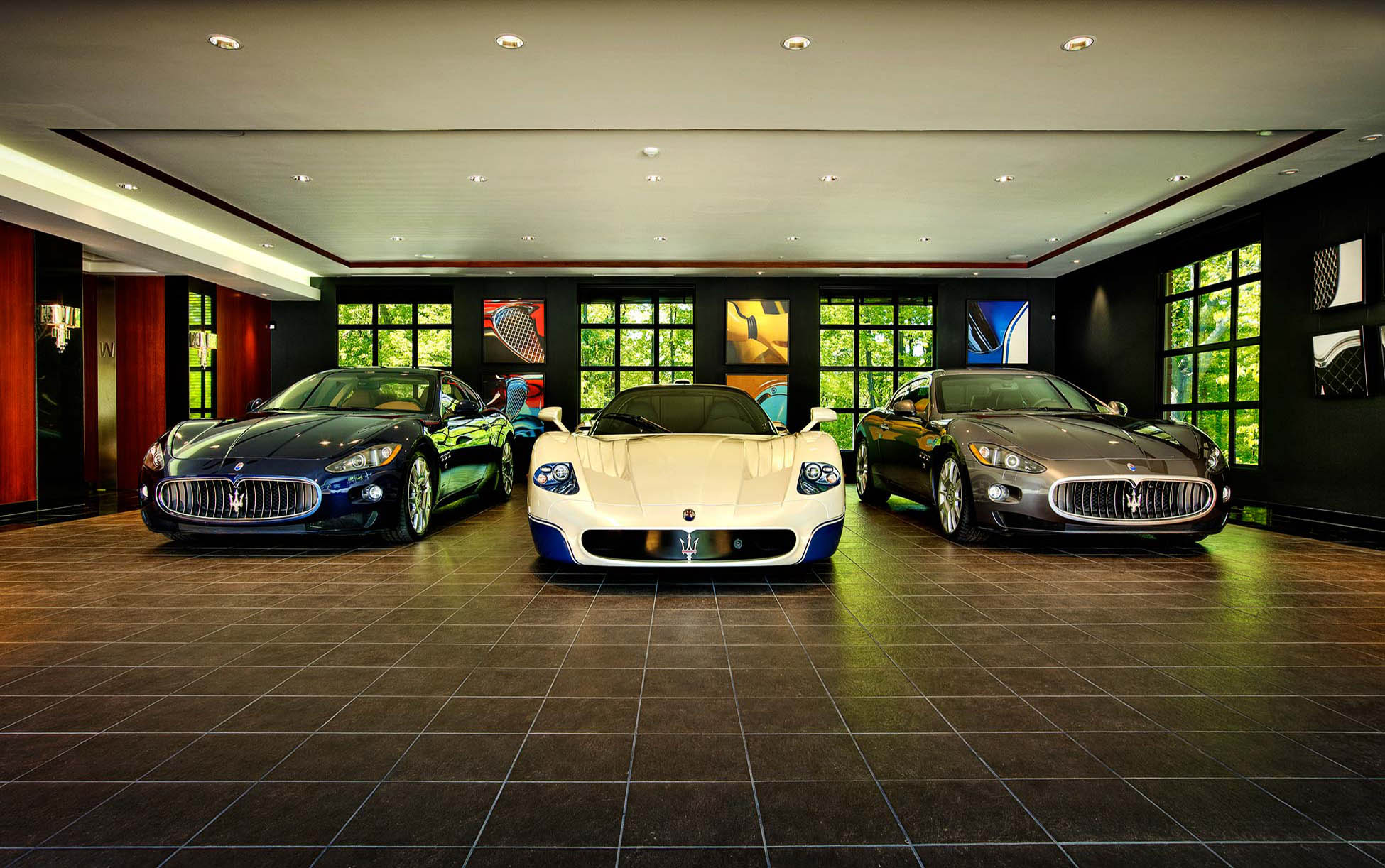