Knocking on the door of the DesRosiers Northern Michigan home south of Leland is an experience that makes you okay even if no one ever answers. Loitering is downright desirable given that, gazing through the 5-by-10-foot glass door and adjoining wall, you feel swept away on a boat; or that you are hanging at a beachside spa. The basics of this inspirational entry are simple. The view shoots head on, through the glass panels, across the great room and out another glass wall all the way to Lake Michigan’s Good Harbor Bay, a scene complete with the Manitou Islands on the horizon.

Without a doubt, the landscape creates unparalleled drama. But don’t discount the exquisite geometry, courtesy of Lou DesRosiers, who designed this home that gently entices you to this remarkable entrance. DesRosiers’s math begins at the walkway that starts out in two rows of five slate squares, then two rows of three, then two rows of two and, hopscotch, you are at the door. On a more subtle level, visitors are beckoned by three-tiers of cedar roof fascia that angle gently to the entry and its magnificent glass foyer wall and door. Lou designed this glass-wall system out of eight horizontal panes of glass, trimmed in mahogany, running flush from the wall to the door. Sleek, clean and serene, it is evocative of a Japanese rice-paper door.

Award-winning architect Lou DesRosiers has designed countless homes and commercial buildings on the East and West Coasts, many points in between and all across Michigan. DesRosiers’s buildings come in all shapes and styles: from estate-sized Renaissance-style French chateau to compact beachy contemporaries. Versatile as he is, DesRosiers has a set of near-intractable principles. Included among them: Perfection is in the details—as in designing flush trim and faceplates—and siting a home carefully within its landscape, especially taking into account sunsets. So when Lou and his wife, JoJo, finally found their dream Northern Michigan lot, he naturally put his rules into practice.

But first, about that property search: It went on for years—as you’ll recall Lou is a perfectionist. It began when the couple first began vacationing at The Homestead in Glen Arbor. The couple’s grown sons, Glenn and Paul, were boys then, and the family would jump in the car and troll the Northwest Michigan coast looking for property. Lou had designed homes in most of the resort towns along the way, so it was familiar terrain. He knew he wanted waterfront. Over time he’d come to understand that he also wanted to be somewhere low-key enough that he didn’t have to put on khakis and a button-down to go have his chainsaw fixed. He also wanted privacy—some sort of a land buffer between his home and the nearest road. Add to that wish list, stellar sunsets.

Pretty big demands to make on real estate, certainly, but Lou and JoJo found everything they were looking for on Lake Michigan’s Good Harbor Bay shoreline, between Glen Arbor and Leland. Their dream lot is on a wooded bluff protected from the traffic on scenic M22 by a small hill. The bluff looks out onto Good Harbor Bay with its embrace of shoreline—Lou likens it to the human comfort of encircling arms—that ends in Pyramid Point to the south and Whaleback to the north. North Manitou Island and South Manitou Island float on the horizon line.

Before so much as putting pencil to draft paper, Lou did what he always does before designing a home. He put a stake in the middle of the property and measured where the sun set relative to it. Then he sited his home around those sunsets. “I don’t care where the property lines are,” he says of the practice. “That’s why my homes are all twisted on the property. Lines have nothing to do with sunsets.”

Lou hired like-minded contractor Don Lewis, owner of Crystal River Corporation to build the home. Don and Lou had worked together several times over two decades. They found they both were perfectionists and share a love of architecture, as well. Theirs is, Don points out, an unusual relationship in the architect/builder world where there is often tension between the designer and the tradespeople. “We both strive for quality and we enjoy pushing each other creatively—it’s really a match made in heaven,” he says.

This neat joinery of seasoned architect and builder included Crystal River Corporation’s crew of highly skilled carpenters—made up primarily of two generations of the Plamondon family who descend from a long line of French Canadian craftsmen. (Serendipitously, Lou’s father and grandfather were French Canadian architects—though his father moved to Detroit in 1920 and designed a number of prominent buildings there.) “This was a very sophisticated structural and aesthetic design and the crew’s attention to detail was excellent,” Lou says.

From that exquisite entrance, the house that Lou designed and Crystal River Corporation built unfolds in clean lines so effortlessly that one’s eye barely strays from the lake view. Again, details large and small make the difference. The floors and the trim and sleek kitchen cupboards are a concert of mahogany—soothing background music to the view-crescendo. Lou substituted unobtrusive butt joints for mullions in the magnificent 7-by-10-foot, inch-thick bronze-tinted glass panes that flank the home’s lake façade; the effect is of an invisible wall. “When we have people visit, they sometimes forget to go outside because they think they are outside,” Lou says.

And when the summer sun sets over Good Harbor Bay, it shines smack dab through those stellar panes of glass, across the great room and through the front door. A celestial detail that Lou envisioned way back when he pounded a stake into the Leelanau County soil. 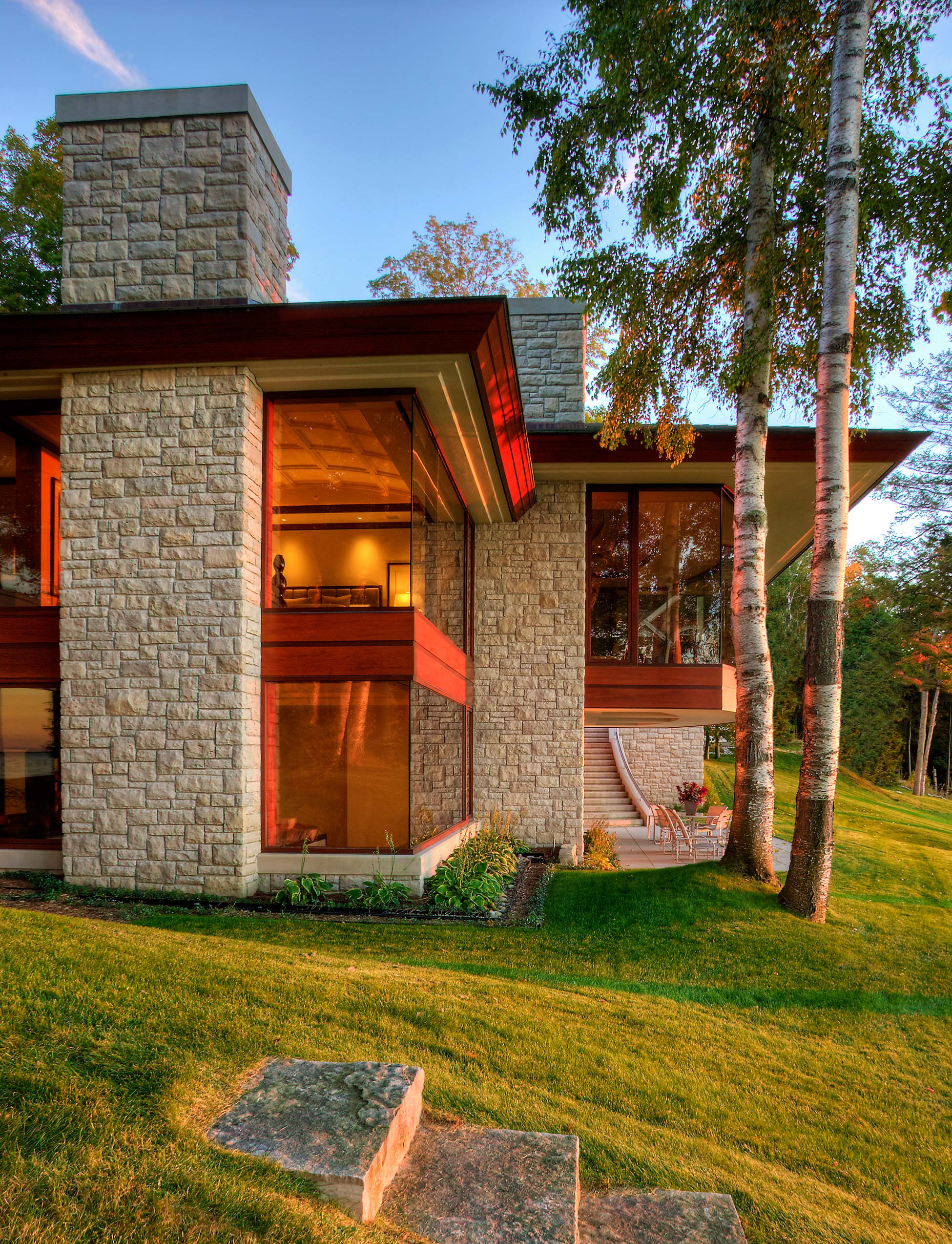 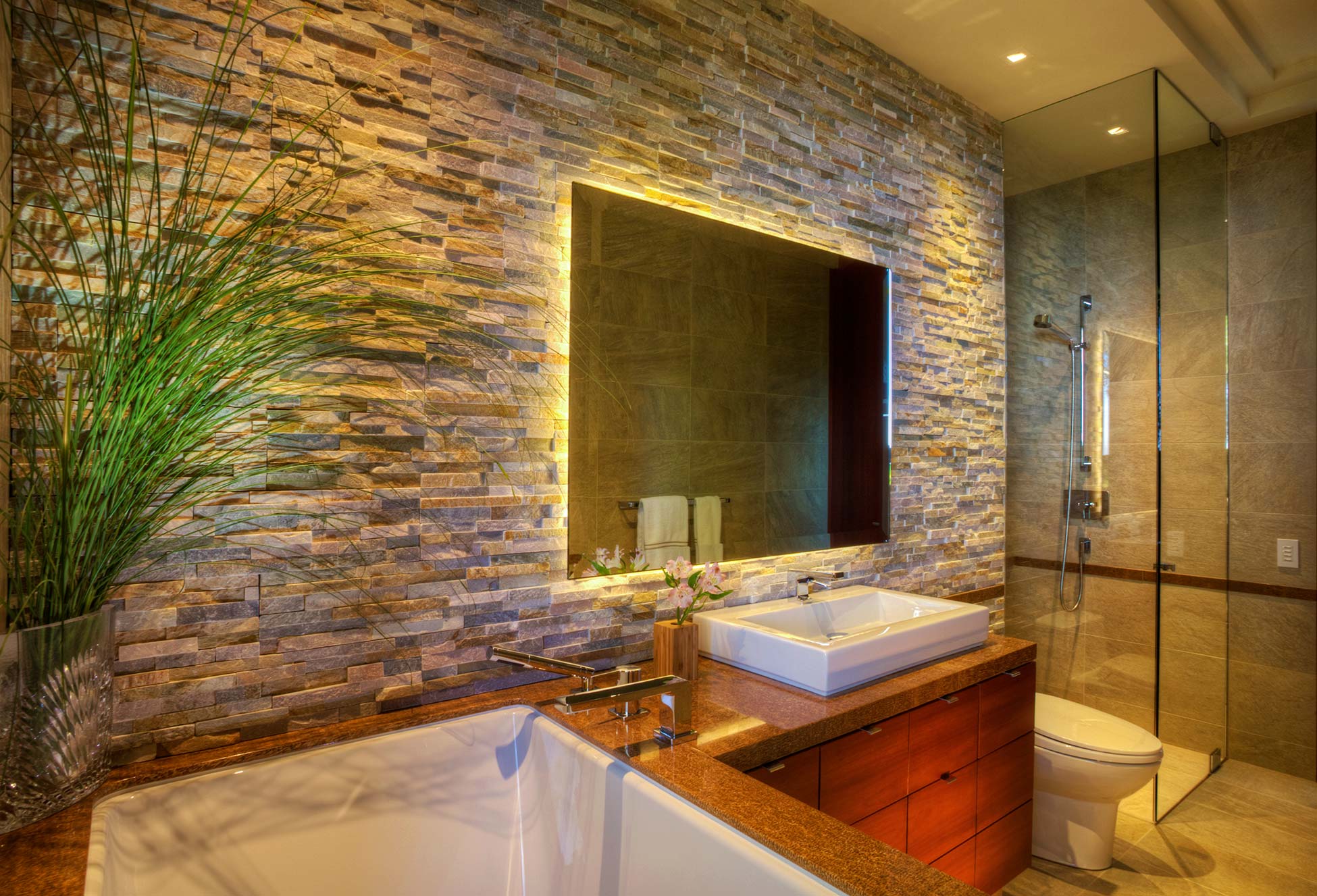 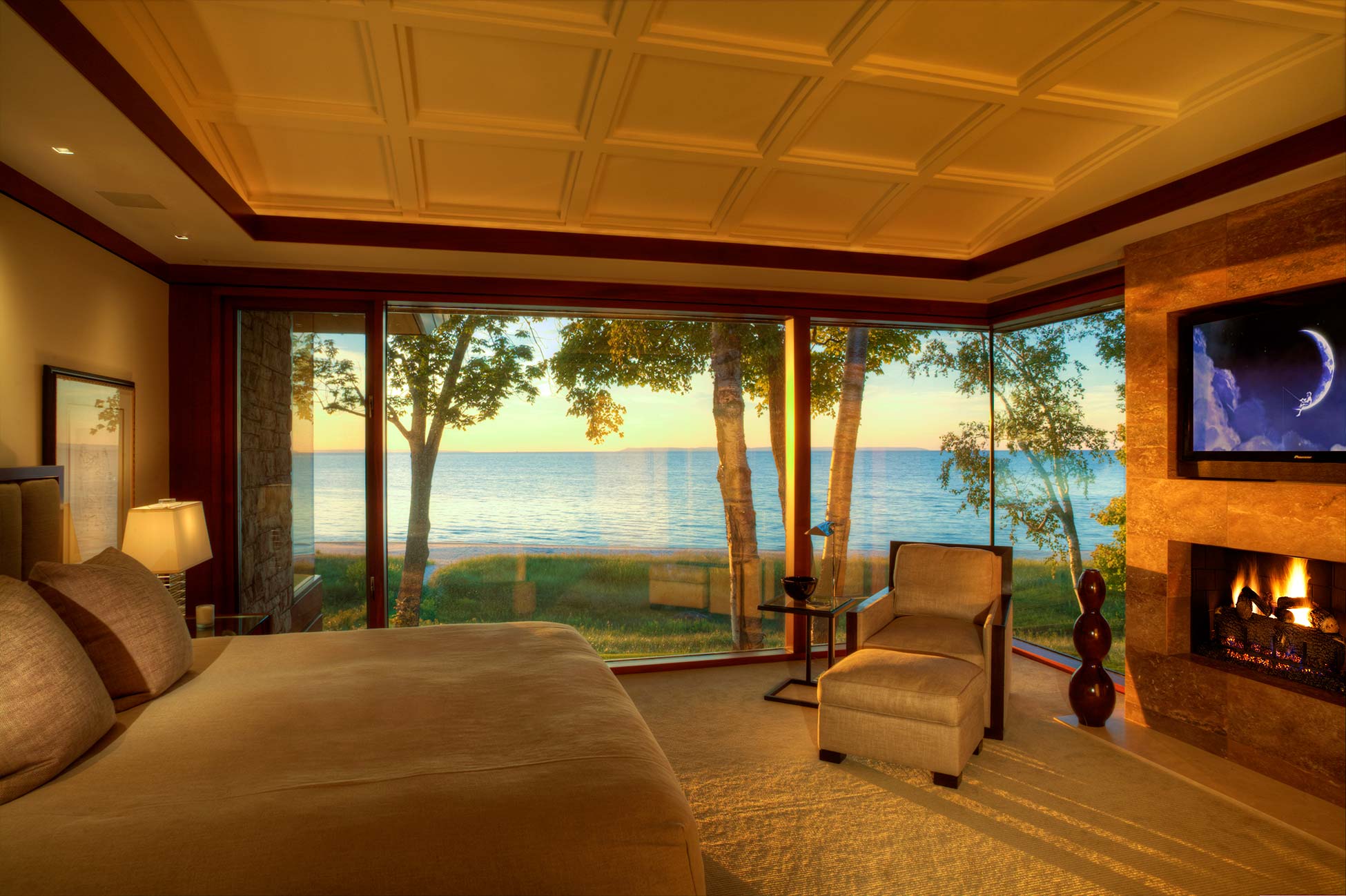