Still Waters and a dash of style doesn’t hurt either

Take a sociable bachelor who abhors ostentation, a notable architecture firm with progressive panache, a dedicated landscape designer and a pre-existing pool, and you’ve got a project destined for success.

Of course, success can be defined in many ways.

“The pool was shaped like a coffin,” says Jeff Hennig, principal designer for Clarkston-based Environmental Artists. “We masked the shape by forming a rectangle with horsetail and black Mexican pebble. It was far less expensive than tearing the pool out and starting over.”

It seems even a sarcophagus can be a made over.

Hennig, who worked closely with Bloomfield Hills-based DesRosiers Architects, was brought in after the hardscape was completed to fine-tune the aesthetic. “The client wanted a highbrow, sleek, yet contemplative garden with edited and refined elements,” Hennig says. The goal was to extend the theme of the home — a 21st-century Asian interpretation of a Prairie style dwelling — with complementary structures and walkways done in Fond du Lac and exposed riverbed aggregate.

Using luxurious materials and a clever approach — such as stationing things on different levels to create cozy enclaves — the back yard transformed into a seasonal retreat that could stretch into the latter part of fall.

“We knew we wanted to elevate the spa,” says Lou DesRosiers, of DesRosiers Architects. “It’s a lot more interesting to sit in because of the waterfall. We also wanted to keep it nestled up close to the house for a cozier feeling.”

The cabana, with stainless-steel heaters, a fully equipped bar, bath, changing room, and kitchenette, is the most impressive addition. A television is hidden behind one-way glass, and everything conveniently closes off in the winter with the help of an electric aluminum door. The landscape flows with simple lines and edited refinement.

“The designs we create are simple, yet complex,” Hennig says. “They’re based on an underlying matrix of design rules we follow strictly. It’s aesthetic nuance that makes all the difference.” And a dash of style doesn’t hurt either. 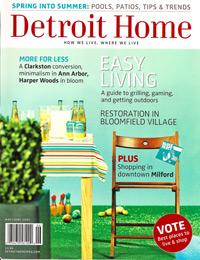 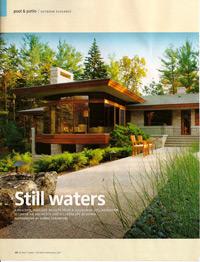 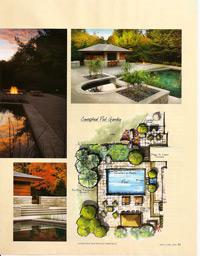 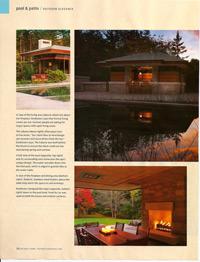 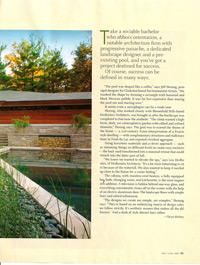